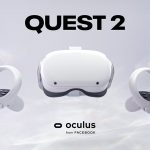 Virtual Reality (VR) is a rapidly expanding market that will inevitably become mainstream. VR headsets are now available on the consumer market for a few hundred quid and whilst the primary application is gaming, they are also being used for social purposes and business collaboration. This is my review of one of these headsets: the Oculus Quest 2.

What is the Oculus Quest 2?

The Oculus Quest 2 is a standalone Virtual Reality (VR) headset.

Because it is standalone, it means that you do not need any other hardware to play games or access other VR experiences (watch videos, access social networks etc.)

You don’t need to hook it up to a PC (although it does have this capability) and so there are no cables dangling down restricting your movement.

And games are downloadable from the Oculus store, straight to the headset.

Put simply, once you have the Quest 2 headset, you don’t need to pay for anything else except your games (and some of these are free).

What about the Oculus Quest, Rift S and Go?

If you’re new to VR gaming the different Oculus products can feel a bit confusing. However, if you wish to buy an Oculus device, the Quest 2 is really the only way to go because the other products are gradually being phased out. There are rumours of a successor to the Oculus Quest 2, but no release date is currently available and I don’t expect it will be any earlier than mid-2022 and perhaps even later. Here is a quick rundown of the other headsets listed on the Oculus website.

The Oculus Quest (or Quest 1) was the forerunner to the Oculus Quest 2. It was more expensive and had a lower specification but was a pioneer in its field. These days, the Quest 1 is no longer available (except in second-hand markets) because the Quest 2 outperforms the Quest 1 in every way, including price. And newer games will only work on the Quest 2 as Oculus phase out support for the older system.

Finally, the Oculus Rift S is/was designed to be connected to a PC. Like the other systems above, the Rift S is being phased out as Oculus are heavily investing in the Quest 2 and its successors.

What about headsets from other manufacturers?

Other than the budget novelty mobile phone headsets that you may have seen (basically a plastic case that you pop your mobile in and strap to your face), the VR market is currently dominated by just a few major players. Facebook/Meta own Oculus and there’s also:

These are all tethered, rather than standalone headsets, which means you have to connect them to a PC (or in the case of Sony, a PlayStation 4 or 5). You can play more complex games on these systems because the processing power is located in PC, however, it does mean that you will have to shell out a lot more money and there will be a link cable hanging out of your headset, which can feel restrictive. It is worth noting that the Quest 2 can also be connected to a PC via a link cable.

After that longer-than-anticipated preamble, let’s get to the full review. For context, I am a 42-year old male with a technical background. I loved gaming in my youth and still do but family life means that I haven’t been a hardcore gamer for about 15-20 years. I think the last console I owned was a Nintendo Gamecube, although I have played Playstation and Xbox with friends. It was my brother who introduced me to VR gaming about 8 months ago and I’ve been hooked ever since.

Upon opening the box, you will find:

Your first challenge will be to find out how the controller opens up to insert the batteries. The process isn’t particularly intuitive and if you are having difficulty, you wouldn’t be the first. This video shows you exactly to do it. The headset itself has a rechargeable battery that is charged using the power adapter – it would have been nice if Oculus provided a stand or a way for the controllers to clip to the headset to recharge all of the hardware through the mains, however, I guess this would have put the retail price up.

Next, you will don the headset, ensuring the straps are adjusted for a comfortable fit before turning it on using the button on the left. Once it boots up and performs the initial configuration, you will probably adjust the headset for a second time to ensure that you can see clearly. If this is your first VR experience, you will be amazed at the depth and realism and just stand there in absolute awe for a little while.

The Quest currently requires you to login using a Facebook account. Although this will not be a necessity in the future, as the Facebook and Oculus companies are split up, it can still be a bit of a ballache for those that do not use Facebook.

In general, the headset is comfortable after a little adjustment but if it is used by multiple people, it does mean adjusting the straps every time somebody new with a different sized head plays a game. It is fairly lightweight and you can sometimes forget you are wearing it as you become immersed in the virtual world.

After an hour or two, the strap can begin to become uncomfortable and I also feel that my eyes are straining to focus on the VR world, however, this is perhaps my body telling me that it is time to take a break. Similarly, my legs begin to ache around this time if I have been playing in a standing position. Interestingly, if I have been playing a fitness game, and have moved around a lot, my legs do not hurt so much so it seems to only be when standing still – it may also be age-related and I’m sure the younger generation do not experience this.

Some people may experience motion sickness whilst using the headset. I did myself at first and would recommend only using it in short bursts to begin with and limiting yourself to more comfortable, seated games. Over time, as I got used to VR, the motion sickness faded.

With a library of over 200 games plus additional VR experiences available both on the Oculus Store and elsewhere on the Internet, there is no shortage of entertainment. The Oculus Quest 2 can also be connected to a gaming PC to access other games and the app lab and Sidequest provide access to other experiences.

I’ve only played official Oculus games but I’ve loved every one of them. From burning calories with Oh Shape and Beat Sabre to having the sh!# scared out of me in Face your Fears 2 and Resident Evil 4 VR. There’s plenty of choice and plenty of fun to be had and there truly is something for everyone.

For a standalone VR headset, the hardware is impressive and creates a sharp virtual world. Technically, the processor is the same that is used in high-end mobile phones and the Oculus operating system is a custom build of Android (also used on mobile phones). But you shouldn’t let this deter you – graphics and performance are brilliant. Of course, you won’t get the almost flawless realism that you would get from some of the latest releases on PC but there is an option to connect the Quest 2 up to a high-spec PC if you wish.

The original Quest 2 came with 64Mb of disk space, however, this is no longer available. You now have a choice between 128Gb and 256Gb. Whilst both will be suitable for the average person’s needs (games average between 1Gb and 2Gb each), going for the higher 256Gb capacity will mean that it will be much longer before you have to uninstall anything to make room for new stuff. And the amount of space needed for games is increasing, with Resident Evil 4 taking up about 8Gb of space.

UPDATE: Nov 21 – Medal of Honor is now the largest Quest 2 game at a whopping 41Gb. Games are only going to get bigger, so I now have to recommend going for the largest capacity 256Gb unit to future-proof your purchase.

In my mind, the Oculus Quest 2 is the VR headset that will be remembered for bringing VR to the masses. It is easy to set up and use, great fun to play and is fantastic value for money.

For the casual gamer or VR enthusiast, the Quest 2 ticks all the boxes. If you are a diehard gamer that expects nothing less than the very best graphics and performance, then a headset such as Valve’s Index combined with a high-end gaming computer would be more suitable. But, for most people, the Quest 2 is everything we need to step into the world of VR.