Skip to content
VR:RVW→Oculus Quest 2→Medal of Honor™: Above and Beyond for Oculus Quest Review

Medal of Honor™: Above and Beyond 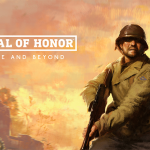 A disappointingly average release from a truly great brand.

At a whopping 41Gb, Medal of Honor: Above & Beyond has become the largest game to hit the Oculus Quest by a long shot (for comparison, the previous title holder, Myst, weighed in at just 9.6Gb).

But is the amount of disk space it takes up (which will be of particular concern to those with and 64Gb Quest) and the length of time it takes to download worth the hassle? Read on to find out.

The storyline is well-written, immersive and amusing at times, however, the sheer volume of cutscenes interrupting gameplay can be bothersome. They can be skipped but then you miss out on the development of the story. Particularly during the beginning of the campaign, I felt I was just getting into the action when another cinematic narrative would cut in on my gameplay.

It is these mini-films as well as the gallery, interviews and COLLETE (an exclusive World War 2 Documentary) that contribute most to the 40 gig download size – the developers should maybe consider an option to omit these features of the game, especially for players that are only interested in the multiplayer option.

If you don’t already know, Medal of Honor is a first-person shooter (FPS) set in the context of World War 2.

The controls seem to work well but are more arcade-like than realistic, which is a shame for a game that prides itself on depicting the Second World War accurately. Examples of this include the aim assist, which means you just have to aim in an enemy’s general direction to get a hit and reloading your gun, whereby you drop your ammo near to the gun and some random magnetic force sucks it into the magazine well.

I also found picking up items a bit tricky and there was an inconsistency in which objects you can interact with – for example, some ladders you can climb and others are just part of the scenery, yet they look pretty much the same.

Some scenes can be disorientating because of the way that your character is positioned relative to yourself. There are levels where the character is lying down and it just doesn’t feel right if you are standing up – to overcome this, I lay down as well.

It is the little annoyances like those listed above that detract from the gameplay and, whilst the game is still good, I think I expected more from a Triple-A developer.

I got absolutely slaughtered in multiplayer mode and didn’t play it for too long, so perhaps I am not the best judge of this side of the game, but I found it to be clunky, unenjoyable and inconsistent and didn’t feel like I was improving.

For the limitations of the Oculus Quest, I felt the graphics were really good, although there is not the same level of detail, textures and lighting that can be found in the PCVR version of the game.

However, even with these concessions to visual quality, I found that the game still stuttered at times with low frame rates. There are settings to adjust the graphics but these seem to be just residue from the PCVR port and are not really very useful.

The audio is okay and the 3D sound works well, but again, I expected more than just the bare minimum from a developer like Respawn Entertainment and a game that costs 30 quid. I felt some of the voice-acting was phenomenal but apart from that, it just felt a bit ‘meh!’

The campaign is around 10-15 hours long, which is good for an Oculus Quest game and on top of that, you have the multiplayer option, which could extend the mileage indefinitely.

I first played Medal of Honor on the Playstation 2 many years ago and I loved the game. For me, the transition to VR has meant that I have lost a little bit of love for it.

I feel that the game is not polished enough for release on the Quest and that the developer is still riding on the name of a great franchise and brand without putting much work into making the game amazing.

I can’t say the game is bad – far from it. And I admit, if this was an indy game, I would have probably given it a higher rating. Maybe my expectations are too high but I just anticipated more from a behemoth like Respawn. They have the manpower and tools to make a truly great game and I just felt that this release was a lazy way to cash-in on their brand.