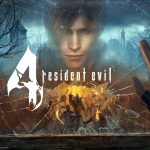 Just like the original, Resident Evil 4 VR is immersive, fun and addictive, with plenty of jump-scares.

I remember playing this title on my Nintendo Gamecube many moons ago. Is it still fun to play over 15 years later?

The game is focused on Leon Kennedy, who has travelled to a Spanish village to save the President’s daughter. But when he arrives, things take a terrible turn for the worse.

I love the storytelling in the Resident Evil games and the way it mixes cinematography with gameplay.

Resident Evil 4 (RE4) VR can be played either sitting, standing or at roomscale. I tried all modes and they worked well, however, I did have an issue with reloading whilst sitting – you grab the ammo from your hip and I inadvertently punched my cushion several times. I also had an issue with reloading whilst standing – you grab the ammo with the left trigger but I sometimes pressed the trigger without meaning to with my arm at my side, which resulted in me emptying the ammo out of my gun. This got less frequent the more I played.

As a first-person shooter, RE4 may cause motion sickness in people new to the Oculus Quest, so it is not recommended to less experienced gamers.

Apart from these little gripes, the gameplay is lots of fun and offers a lot of variety. For example, as well as the standard point and shoot dynamics, you are prompted to perform other motions to escape the grasp of enemies or swim away from a monster fish.

You wander around the locations solving puzzles, fighting enemies and facilitating the unfolding of the story. You can collect items and the weapons get better as you progress. You can even tune-up your weapons to give them more firepower, quicker reloading time or more capacity.

Even 15 years after its original release, the graphics are still pretty cool and there are a wide variety of enemies to kill. Admittedly, some of the rank-and-file enemies are doppelgangers of one another, but that is to be expected.

The audio is decent as well, with music and sound effects intensifying during key moments and supporting the jump scares and panic.

There are over 5 hours of gameplay with this title. I’ve spent about that long getting to the third chapter and I’m only about halfway through it. And this is on the easy setting – once complete I plan on doing the whole thing again on hard.

Despite this being a retro game that is over a decade old, I class RE4 as one of the best titles available on the Oculus Quest today. It’s fun, immersive and challenging and I expect I will still be playing it for a good while.

However, at £30 it is also one of the most expensive games for the system and so may not reflect good value for some people.