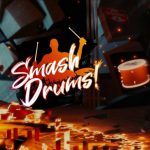 A decent indy drumming game…but there is a better alternative.

The Oculus Quest is made for rhythm games and Smash Drums brings a new fun drumming experience to the console.

Like other games in this genre, you use the Oculus Touch controllers to move your hands in time with the beat – in this case, smashing along with the drums.

The gameplay gives you a buzz and is addictive and the force feedback you feel through the controllers provides an extra level of immersion.

The graphics are okay (they could be better) but it is the gameplay that really makes this game worth the asking price.

There are lots of settings you can change, however, the drumming motion you have to do to select an option can become tedious at times.

Unlike most Oculus rhythm games that have playlists of electro music, Smash Drums has a rock-based music library. This is great for me as I prefer to listen to this sort of music but will not appeal to everyone.

Multipayer and leaderboards are incorporated into the game so the fun doesn’t stop when you beat the campaign. You will find yourself saying ‘just one more game’ as you try to improve your score each time and climb the leaderboard.

Smash drums is a perfectly good game and worth the price tag (although it could be a bit more polished in places). However, if you are looking for a rock-based drumming game, then Ragnarock is a better alternative in my opinion.

Get ready to ROCK and DRUM HARD in this unique VR rhythm game!

NEW: Online Co-op and Versus modes for up to 8 players!

Embark on an epic drumming journey that will have you destroying multiple environments through chaos and flames! Be prepared to smash drums to 30 great rock songs, and more to come!

This is Smash Drums! Rock & roll has never been more alive…