Captain ToonHead vs The Punks from Outer Space 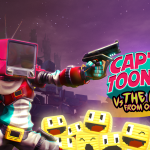 An eclectic mix of tower defence and first-person shooter in a seizure-inducing explosion of colour and madness!

Captain ToonHead vs The Punks from Outer Space is a mouthful to say – 12 syllables in all – and sets the scene for a game that is over-the-top in almost every single way.

It seems like when the developers brainstormed ideas for the game they had a caveat that they were not allowed to say no to anything. Tower defence or first-person shooter? We’ll have both! The enemies should be punks. No, chickens. No Tyrannosaurus Rex’s. Sod it, let’s have them all!

You play as Captain Toonhead, Earth’s last defence against a horde of extraterrestrial invaders. They want your enerCubes and you must do everything in your power to protect them.

This sets the scene but as you play the game, you forget the story and don’t really care too much about the characters or wider context. There is no real progression to the narrative and your focus will be based on getting through the level and moving to the next one.

Essentially, this is a tower defence game. You set up defence towers and then a wave of enemies are unleashed. Their objective is to navigate from the entrance of the compound to where the enerCubes are, grab them and make their escape. At the end of each wave, you collect resources from the fallen enemies that can be used to build more towers in readiness for the next wave.

However, unlike regular tower defence games that provide a birds-eye view of the map (as if you were a General looking down on your defences), Toonhead puts you right in the middle of the action. From a first-person perspective, you can not only build your towers but also support them by taking down enemies yourself with a range of weapons.

The range of towers and weapons at your disposal is varied and as random as you like – again, it seems the developer integrated every weird and wacky idea they had into the game with no filter.

The controls are easy to pick up after a few minutes of play and the game started off really enjoyable. However, later on the levels became a bit long and repetitive and I started to lose interest in the game.

This is the Oculus Quest, so the graphical capability is never going to be as good as PCVR and I think most people understand this. But the graphics and animations in Toonhead are not particularly good at all. I wouldn’t say they were terrible but there were a few little glitches that detracted from the gameplay and there is just so much colour and movement going on that it can feel a bit overwhelming. From a distance, the movement of some enemies looks jerky and unrealistic.

I thought the voice actor that played Captain Toonhead was really good and performed the character well. However, the quality of voice for the other characters was variable – some were okay and some were terrible.

The music and sound effects were decent and worked well with the gameplay.

For the tower defence aficionado, there is a lot to keep you busy but I found that gameplay became too repetitive as I hit the higher levels. The waves became longer as well and more than once I felt like it was neverending and I couldn’t be bothered to carry on.

Captain Toonhead vs The Punks from Outer Space is a mad game and the colour and randomness may feel to some like an LSD trip.

The combination of an FPS with a tower defence game is an interesting element and I felt it worked pretty well, offering strategy between waves and immersion during the enemy attacks.

It is fun to play for a while but becomes a bit boring once the novelty wears off. It is also let down by the graphics and voice acting in places. Because of this, I don’t think it is worth the £18.99 price tag and would put the value at around a tenner. The concept is unique, but unfortunately, I don’t think I’ll by going back and finishing the game anytime soon.