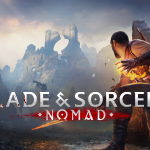 Blade & Sorcery has a solid following in the PCVR community, so there was a fair bit of hype when it was released on Oculus Quest. But does it live up to its reputation?

I like a good story with the games that I play but Blade & Sorcery: Nomad has none of this. You simply head off and try to kill as many enemies as you can with a variety of medieval weapons.

As stated above, the gameplay simply involves wandering around hacking the crap out of various enemies.

But, the physics-driven combat engine is pretty awesome and allows you a lot of flexibility in the way that you fight. From parrying blows to liberating limbs, there’s a lot of variety to the action.

I felt the implementation of sorcery and archery were pretty poor experiences compared to other games and maybe should have been left out completely (but then I suppose that would mean changing the game’s title).

The AI that runs the characters that you fight against is also pretty poor and after a short amount of practice they can be killed easily and consistently.

The graphics are pretty good but can be buggy at times with glitches, frame drops and freezes occurring consistently.

Blade & Sorcery: Nomads is a very hardware intensive game and I feel that the Oculus Quest is perhaps not the best platform to it justice.

Sound effects, such as screams and the clang of metal-on-metal are pretty decent, but there’s not much else in terms of music or voice acting.

There are a few different settings to change the location and the combat engine allows for a multitude of different fighting styles. But on the whole, I got bored of this game quite quickly.

Saying that there’s a whole host of people that love playing this game so that they can go around murdering people, so it must have some appeal.

Okay, the physics-driven combat engine is awesome and, for me, this was the only saving grace in this game.

I felt that if the combat gameplay were to be incorporated into a more plot-driven or character-driven game, this could be a massive bestseller. But, right now, it seems to be just a proof of concept for a combat engine.

It’s fun for a little while and I can see it would have some stress-relieving aspects to it as well as you slash through enemies. Maybe even lose a few calories doing so. But as a full-fledged game, it’s not for me.