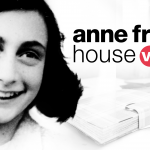 In 1942, during the Second World War, Anne Frank, a thirteen-year-old Jewish girl and her family were forced to go into hiding to escape persecution from the Nazis. For more than two years, the Franks and 4 others would live in the “Secret Annex” of an old office building in Amsterdam, sharing the burden of living in hiding in confined quarters with the constant threat of discovery. Anne Frank House VR offers a unique and emotional insight into these two years. Experience the world-famous Secret Annex in a never before seen way. Travel back to the years of the Second World War and wander through the rooms of the Annex that housed the group of 8 Jewish people as they hid from the Nazis. Immerse yourself in Anne’s thoughts as you traverse each faithfully recreated room, thanks to the power of VR, and find out what happened to the Annex’ brave inhabitants.”