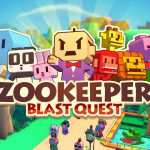 I’ve made it clear in previous reviews that I cannot stand colour-matching games and Zookeeper: Blast Quest is no exception.

Originally released on the Gameboy Advance generation of handheld consoles, Zookeeper has been redeveloped for virtual reality.

The story is that you need to rebuild an abandoned zoo by matching colour blocks by shooting them. There’s nothing new or original here and it is as boring as it sounds.

The developer has tried to make the game more entertaining by having you complete quests and there are some gameplay aspects out of the game but apart from that, it’s no better than a smartphone game.

The graphics are below par and the audio is repetitive and annoying.

Now, there are plenty of people that do like this sort of game and my own personal hatred towards the ‘colour-match’ genre has obviously had a big impact on the rating I have given this game. So, if you disagree with me feel free to provide your own ratings and comments below (your ratings will make a difference to the overall rating on this website).

For me, Zookeeper: Blast Zone is a hard pass.

Experience new “Zookeeper: Blast Quest” where you will meet the familiar Zoo Owner and animals from ZOOKEEPER!

Do well in the puzzle to collect stars, clear missions in the zoo; feeding animals, help visitors find their lost child, fish for food, and many more!