Skip to content
VR:RVW→Oculus Quest 2→Until You Fall Review 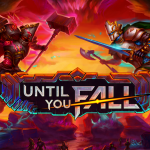 Until You Fall is an arcade-inspired VR hack-and-slash roguelite that will force you to find and master your own fighting style for hours of frantic, kinetic fun. Prepare for the fight of your life. Move your arms and body to the synthwave soundtrack as you attack, block, cast spells, and dodge your way deeper into the heart of a neon fantasy world filled with magic-infused monsters. Equip yourself with a variety of gameplay-altering weapons as you continue to gain strength and strike down the monstrosities that lurk throughout this mystifying world. Features + Each run features randomized rewards, powerups, enemy configurations, and rooms – no two runs are quite the same + Arm yourself with a selection of powerful weapons and charge into battle with your own unique fighting style + Driving synthwave soundtrack keeps you moving in and out of the game + Customizable comfort and accessibility options help you move and battle comfortably in VR The game is in English only.”