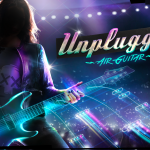 Shred like a rock star as this evolution of the Rock Band genre of games ditches the peripherals for hand-tracking technology that makes playing air guitar a reality.

Unplugged is the first game (to my mind) to really utilise hand-tracking technology.

It boasts that it can actually track your hand and finger movements as you play air guitar in this rhythm-genre game. But how well does it work? And is the game fun to play? Here’s my review of Unplugged for the Oculus Quest.

Mentored by Steel Panther’s ‘Satchel’, unplugged follows your progress as you achieve your master plan of becoming a rock guitar legend.

Much like Rock Band, Unplugged is a rhythm/musical game that has you playing electric guitar to rock covers in the correct time and sequence of a constantly approaching template.

However, unplugged takes an innovative new approach that utilises the features of the Oculus Quest by introducing hand-tracking to the gameplay. This means that you don’t need to use and peripherals, such as the Oculus Touch controllers – the headset picks up the movement of your hand and fingers as you play the notes.

And, I have to say, this works surprisingly well. In fact, much better than I thought it would – the accuracy is almost flawless! There were a few times when I was sure that I hit the notes but they didn’t register but these occurrences were few and far between. Playing air guitar is an unusual experience and not having the tactile feeling of a guitar in your hand takes a bit of getting used to.

There’s a decent selection of rock songs to play by recognised artists and three difficulty levels; easy, medium and hard. Good performances lead to more venues, guitars, tracks and gear being unlocked, which makes you feel as though you are progressing towards your dreams of stardom.

The graphics are pretty good for a rhythm game and I could really feel the atmosphere of the venues that I was playing at. Although the game itself feels somewhat cartoony in terms of graphics and animations (as do most Oculus games), the lead guitarist of Steel Panther, who acts as your guide, is non-CGI.

The audio is really good with a great selection of over 20 awesome rock tracks to play along to spanning over 5 decades.

Like all rhythm games, if you enjoy the genre you will get a lot of playing time from this game. It begins quite easy and I was coasting along quite nicely until I got to level 3 and there was a big leap in difficulty. It took a while to get past this but it felt really good when I overcame the challenge. However, such a steep increase in difficulty may put off some players.

Unplugged is an amazing technical achievement and is currently the best Oculus Quest experience to take advantage of hand-tracking technology. I thoroughly enjoyed this game and expect to play it a lot more.

It was released at around the same time as Ragnarock – a heavy metal drumming game – and I felt spoilt to have two rock-rhythm games to play at once. Whilst I think they are both great, I found Ragnarock to be more fun and competitive with its multiplayer option. However, Unplugged does have a better soundtrack, with more well-known songs and can be more intricate and challenging.