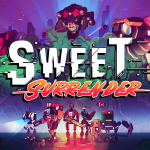 An okay roguelike first-person shooter but the lack of variety and a decent progression system lets it down.

Roguelike is a term used to describe the genre of games that evolved from the 1980s classic Rogue: Exploring the Dungeons of Doom. These games share a set of characteristics that include procedurally generated maps/enemies/upgrades, permadeath and progressively more difficult levels as the player attempts to get to their objective.

The last roguelike game I played was Dead Cells on the Nintendo Switch. I found it surprisingly addictive and kept telling myself ‘one more go before bed’ as morning approached.

Sweet Surrender is the latest Oculus release to incorporate roguelike features – check out my thoughts below.

The narrative has you playing a single human in a robot-infested tower. You have to battle through progressively more difficult levels to reach the top and take power back from the mechanical overlords. As in most roguelikes, the storyline takes a backseat to the action.

So, you begin at the bottom of the tower and have to fight your way through each randomly generated level to get to the next stage. Each level is more difficult than the last but you earn power-ups along the way to help you with the new challenges.

Sadly, unlike most roguelikes, your powerups and progression are lost when you die, so it can feel a little tedious going all the way back to the beginning each time. However, the developers have said that they will be introducing more variety (such as classes) and progression between dungeon runs in a future patch.

The controls are self-explanatory. You can carry two one-handed weapons (e.g. a pistol and a metal pole) at your hips, a two-handed weapon (e.g. shotgun) on your back and two items (e.g first aid kit and grenade) on your chest. There are a wide variety of weapons to choose from and they have been balanced pretty well – what I mean by this is that no single weapon is particularly over or underpowered and your choice of weapons will be based on your own preferences.

Because each level is randomly generated each run, you never know what to expect going into a room and you will get a different map/enemies and power-up each time you play. This helps to keep the game interesting because the variety in the types of enemies and environments are severely limited. And talking of enemies, their AI is virtually non-existent so it is easy to predict what they will do – I didn’t progress too far into the game so maybe this changes later on.

On many levels, there are platforms that you can teleport up to, which give the environment slightly more depth. The developers have added a graphic for a teleport pad for this functionality, which I quite liked because it added a touch of realism to the upwards and downwards locomotion. In contrast, a lot of other games use teleport for jumping and climbing with no logical explanation – basically, it is just easier to program a teleport transition.

The best way to describe the graphics is to say that they look like a comic book. They feel flat and have no texture but some decent work has been done with regards to the light and shading.

Because of the simplicity of this style, I never experienced any lags and the game ran perfectly smoothly throughout, however, the visuals did feel a little bland.

The music is straight out of a cheesy 80s action movie, with the action and drama being accompanied by the sound of a synthesizer. The music heats up and increases in tempo during fights and dies down again once all enemies are cleared. Growing up in the 80s, this appealed to me, however, it may sound comical to younger players.

Sound effects are what is to be expected from this type of game. They’re not great but not bad either. 3D sound has been implemented well, so you can hear which way enemies are approaching from.

For people that like this type of game, there is plenty to keep you occupied for a long time. Personally, I didn’t enjoy the rinse and repeat style of gameplay because the lack of being able to bring anything over from previous runs made me feel as though I wasn’t making any progress.

As stated above, for lovers of roguelike games, there is a lot of enjoyment to be had from this title as you shoot your way from level to level trying to reach the tower’s summit.

Although the levels are generated randomly, which means no two games are the same, I felt that there was just not enough variety in the enemies and scenery. All the walls look the same, all the doors look the same and the selection of robots isn’t all that big. So whilst the levels were not technically the same, they did feel the same.

The gameplay is fun for a while as you shoot robots and try to find your way out of each level and it is quite addictive as each time you try to better your previous score but after a couple of hours, I began to get bored of it and haven’t felt like going back to it since.

On the whole, the game is okay and I’m sure it will get better as the developers implement the features on their to-do list but right now, I don’t think it is worth the £18.99 price tag.