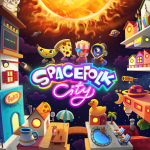 Spacefolk City brings the city builder genre to the Oculus Quest and whilst it has several limitations it is still great fun to play.

Spacefolk City is the first real city-builder game on the Oculus Store. It is of the same as ilk as classics like Sim City and Theme Park World and can provide a lot of satisfaction for those that enjoy this genre.

The spacefolk are at the brink of a cataclysmic event – their sun is going to supernova and they need you to help them to escape and build a new civilisation in outer space.

You start the game looking at a lone platform in the vastness of space with a single ‘spacefolk’ ready to start building their new city. Building in space utilises the 3D capabilities of VR and you are able to view your city from lots of different angles.

Before you can start building, your little guy needs some resources and it is your job to grab passing asteroids and break them up into the raw materials needed for construction. At first, this can be quite fun but quickly becomes laborious as your city expands. Perhaps a building that does this for you automatically could be unlocked later in the game is needed to stop this from becoming tedious.

Next, we need power. Nearby there’s an ‘electric cloud’ and you can get your spaceguy to build a power station that will harness the energy from it.

Now we need a house for the little fella. So you place him a house and he will get to work building it. You can pick him up and drop him nearby to speed it up a little as well as pass him building supplies. Once built, he will moan that he doesn’t like it so you will need to decorate it according to their tastes.

This brings us to quite an interesting part of the game – each ‘spacefolk’ is of a particular species, such as banana, hot dog or pizza. The decoration and buildings in their area should be customized to their particular tastes. So, for the banana folk, you would need to decorate buildings with banana-related paraphernalia.

Do this and you make them happy. And happy spacefolk results in more spacefolk migrating to your city as the rescue bus is sent out to pick them up.

You can also construct buildings for the residents, which can be used to increase their stats, such as skill and stamina and make them more productive citizens.

The graphics are colourful and quirky and the different types of spacefolk means that there is a lot of variety to your city. I never experienced any glitches or freezing and everything moved smoothly. The animations of the spacefolk are also pretty cool.

The background soundtrack is a custom score designed to feel like a radio station. The music is fun and arcade-like, which fits the general fun theme of the game perfectly.

There are just 8 campaign levels, so the experience of building in outer space can be over quite quickly. Although there is a ‘free build’ mode, the size of your city is limited to the range of a single power cloud, so dreams of building a vast metropolis are quickly dashed.

As a pioneer in VR city builders, Spacefolk City is pretty cool, although it does have several limitations.

As stated previously, grabbing and breaking up asteroids can become a bit tiresome after a while and an option to automate this would be beneficial. And the 8 levels can be over quite quickly.

There is a sandbox mode, however, this is limited because there is just a single power cloud which restricts how big your city can be.

NOTE: additional power clouds have been added with the latest patch.

Working within the restrictions of the power cloud also means that your city can look quite cramped and chaotic, which can be unsettling for people like me that want to design a beautiful city that utilises empty space.

I also found placing buildings to be a bit fiddly and frustrating at times and perhaps a button to quick-lock the outline in place would be useful.

For me, the price point is a tad too expensive for what the game offers and would prefer it to be in the £10-£12 bracket.

But, on the whole, Spacefolk City is an enjoyable experience and will hopefully be the first of many city-builder games to grace the Oculus Quest.