Skip to content
VR:RVW→Oculus Quest 2→Song in the Smoke Review

Song in the Smoke 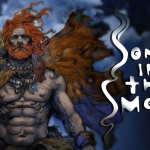 Song in the Smoke is perhaps the first real survival game to hit the Oculus Quest.

There is a rough narrative to Song in the Smoke, which plays out in between levels as cutscenes, however, when you are playing the storyline is forgotten and your full concentration is focused on surviving.

The controls are pretty intuitive. Items are picked up by reaching out with the controller and pressing the trigger. Swing the controller to hit with a club. Draw your bow and release to let arrows fly. Both hands work in pretty much the same way, unlike a lot of games that use one hand for your weapon and the other for items.

You play as a caveman whose primary objective is to survive, however, this daily grind is interspersed with visions from his ancestors to uncover the family secret – following their guidance, you advance through a series of levels/maps of increasing difficulty. Each world is open and you are free to roam wherever you please, although I found it a constant struggle to stay alive.

I’ll be honest here, gameplay is VERY challenging. You have to worry about food, shelter at night, warmth and exhaustion as well as exploring the area and crafting items out of the debris that you find.

I know a lot of people that would absolutely love this challenge but sadly I just found it infuriating.

For example, I’d wander away from my camp and a moment later I’d be hungry, so I’d look around for something to eat and find a deer-like creature. Flick to my inventory to grab my bow, look up again and the deer is gone. Roam around trying to find it again, locate it and land a perfect shot with an arrow. But the bugger’s still alive and runs off. Follow the trail of blood through a bush and the deer is there looking right at me. It headbutts me and runs off again. Track it again and hit it with my club right across the skull but it’s still alive – it takes another 4 or 5 hits to actually kill it! I take as many resources as I can from the carcass and its night time and I need to get back to my camp, the whole day being spent just trying to eat.

Now, I do appreciate the appeal that this will have to some players, particularly those that are into survival games. And I also appreciate that I suck at the game. But it’s not really for me.

The graphics are decent and have a kind of artistic feel to them. It’s quite difficult to describe – for example, the hands are very detailed with wrinkles and veins but also have a sort of fake look to them. However, this in no way detracts from the game and sort of sets its artistic look and feel. It has an individual style – I think that I would be able to recognise the same visual artists work in other games if that makes sense?

All animations were pretty smooth and I never experienced any freezes or drops on frame rate. However, jumping and climbing actions do use a sort of teleport system, which takes some of the realism of battling through the wilderness away.

The audio is basic but works fine with the game. The overall quietness combined with natural woodland sounds helps to create the atmosphere of a lone survivor living off the land.

This game is vast and those that enjoy survival experiences or love a challenge will get a lot of mileage from it. Unfortunately, gamers that are not into this style of play (like me), will get bored quickly and perhaps rage-quit.

I think a certain type of player will get a lot from this game, however, this type of player is not me. Rather than being fun or relaxing, I became exasperated and felt my blood boiling.

As well as hunger, you also have to continuously worry about how cold it is, your exhaustion levels and possibly if you are bleeding or poisoned. There are lots of ways to die and I feel this makes the survival aspect realistic.

For example, I spent half a day picking up sticks for my evening campfire, only for it to go out in the middle of the night when it started raining. This should be a learning experience that teaches me to make sure I set up camp in a cave in future. But I just felt annoyed that I’d wasted my time.

You can only save your game at the campfire and one time I forgot to save before traversing levels and was immediately killed and lost about an hour of progress. I haven’t played since.