Rhythm of the Universe - Ionia 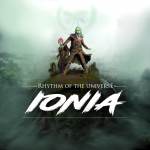 Explore a visually stunning world with beautiful ambient sounds…for about an hour, then it prematurely ends.

Rhythm of the Universe – Ionia is a delightfully immersive exploration/adventure game with enchanting visual and audio effects…but does the gameplay hit the high bar set by the artistic aspects? Read my review to find out.

Playing as one of two siblings, you venture into the heart of the Ionian forest to save a dying creature.

The storyline is pretty good and gives your character direction and purpose. You actually want them to achieve their objective. It also has undercurrents of environmental and conservation themes, which is the primary message that I think the developer wants to communicate. And with 5% of profits going to conservation charities, it is obviously an issue that the developer deeply cares about.

The gameplay itself is rather lacking – I felt that it was more of an interactive VR experience than a game in itself. You can move around, climb and there are puzzles to solve but they are woefully easy and just seem to be something that have been added in post-production to break up the story.

The controls are a little clunky, with teleport rather than smooth scrolling but this may be better for players that experience motion sickness.

The climbing motions work well but there is a lot of cliff-climbing and vine-swinging that becomes a bit tedious after a while.

Wow! The graphics are magnificent – some of the best I’ve seen on the Oculus Quest.

You really feel as though you are actually immersed in the game and the vistas you can see whilst you clamber around are breathtaking. If I was rating this game on graphics alone, it would be 5 stars!

Similarly, the audio is also awesome, from the music to the background noise to the effects. They all work together to create a pleasing harmony of sound. There are also lots of interactive instruments that you can play with along your journey to make your own sounds and music.

Despite having appealing sound and graphics, the game itself is remarkably short – even if you take your time, the whole experience will be over in about an hour, which is unfortunate.

After that, it has nothing left to offer other than taking in the vistas and a few more ambient sounds. I actually felt a little bit cheated when I got to the end.

All artistic aspects of the game are simply beautiful and have an awful lot of charm but sadly there is no real challenge to the gameplay and it is over way too quickly.

Ionia is marketed as a ‘game’ and I feel there will be a lot of disappointed players because of how easy it is or how short it is. I feel it would have been better marketed as an interactive experience or story with elements of gameplay.

It is a lovely experience but is over far too quickly.