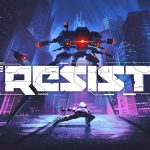 Leap around a stunning sprawling cityscape completing sidequests and pursuing objectives to progress the story.

Resist is one of the games that had flown under my radar. I’d not heard too much about it and so did not know what to expect when I launched it for the first time. I was pleasantly surprised by what I experienced.

Resist is set in a dystopian future with power held by oppressive dictators. You play as Sam Finch, a member of the resistance as they attempt to seize power from their draconian overlords.

You play in front of a huge cityscape backdrop and leap between skyscrapers and other buildings completing missions and sidequests to promote the agenda of la resistance. It is an open world that you can explore at your leisure.

The gameplay mechanics offer something different to regular FPS experiences in that you can jump/fly around the city using technologically advanced equipment. Controlling this aspect of gameplay is a bit difficult at first but after a bit of practice, it becomes second nature.

As you progress through the game, you can gain experience and level up as well as unlock new equipment, which helps to keep things interesting.

The visuals in Resist are absolutely stunning. High-quality graphics and animations help to keep you immersed in the virtual world and the attention to detail indicates that the developer is somewhat of a perfectionist. Changes between day and night and different weather patterns add to the realism of the game and striking visuals, such as the sun reflecting off the windows of the skyscrapers are beautiful.

As well as getting the graphics spot-on, the developers have also done an awesome job with the audio. Music and sound effects are great but the real stars are the voice actors who bring the characters to life and help to ensure that you really care about the unfolding storyline.

Whilst there is plenty to do within the game itself, it will only take about 5-6 hours to complete the game. After which, I feel that replayability is limited because it will become repetitive. Although the gameplay is cool, the driving forces behind Resist are the plot and the characters so once the story has concluded there may be little motivation to back.

Having said that, there are leaderboards for the minigames scattered throughout the game, so an element of competitiveness will remain and may provide a way to keep the game alive once the campaign is complete.

Resist is an awesome single-player FPS for the Oculus Quest and provides a lot of uniqueness and variety to gameplay as well as high-quality graphics and audio. Coupled with the captivating storyline, I think it is great value for money at £15 and well worth a look.