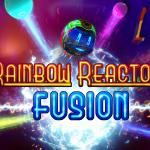 An innovative mix of match-3 gameplay with 1st-person exploration makes for a dull and boring game.

Match 3 games, where you have to put 3 or more of the same tile next to each other have been around for ages. Rainbow Reactor: Fusion brings this style of game to VR. But is it a hit or a miss…read on to learn what I thought of it.

Your goal in this game is to restore power to the city by repairing some sort of rainbow fusion reactor. As a relation of the scientist that designed the power station, you are tasked with getting it back up and running.

There are two aspects to the gameplay.

Firstly, from a first-person perspective, you wander around the power station finding and replacing fuses, cleaning up spillages and locating reactors. I found this to be tedious – think of a 3D version of Park Patrol but 10x more boring.

The second aspect of gameplay is getting the reactors repaired by playing a sort of Puzzle Bobble game, where you have to match 3 or more of the same colour to catalyze a reaction. Each reactor has a set number of reactions that need to be made before it is fixed.

One of the unique differences of this game to the plethora of clones is that you can mix colours together to make new colours. Blobs roll down rails to your left and right and if you grab them both (one in each hand) and smash them together, you create a new coloured blob. Another difference is that instead of aiming and firing, you literally throw the blobs onto a grid – judging the amount of power to use can be a bit tricky.

However, it is still a Match 3 game, like Emoji Blitz, and I’m not particularly fond of these types of games so I couldn’t really get into it.

The graphics are actually pretty good and I would say they are wasted on this game.

Audio is okay except for the monotonous tone of the annoying robot that follows you around everywhere – if I had the ability to smash up the robot, that would have improved the game for me (and, believe me, I tried to).

I’ve been told the game is quite short and story mode will be over in a few hours, however, arcade mode will be unlocked for any players that want to continue ‘making reactions’. After the first few levels, I couldn’t motivate myself to carry on playing.

Unlike many of the reviews for this game which are favourable, I found Rainbow Reactor to be tedious and boring. I’ve never been a big fan of the Match-3 game genre and this probably affects the rating I have given it.

However, I concede that I am not really the target market for this game and there will be plenty of players that will get a lot more out of it than I did.

The graphics and audio are decent and there are some nice innovations in there to make it a bit more unique from your average match-3 clone but sadly, it was not for me.