Skip to content
VR:RVW→Oculus Quest 2→On The Morning You Wake (To the End of The World) Review

On The Morning You Wake (To the End of The World) 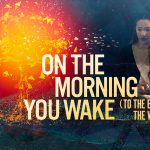 On January 13th 2018, 1.4m people across Hawai’i received an SMS from the state’s Emergency Management Agency: BALLISTIC MISSILE THREAT INBOUND TO HAWAII. SEEK IMMEDIATE SHELTER. THIS IS NOT A DRILL. In the minutes that followed, they were forced to confront existential questions that had been unthinkable just moments before: where could they go for shelter? What would remain of their communities if they survived a nuclear blast? How could they explain to their children why we live in a world where such unimaginable destruction was possible? And how could their own Government continue to pursue nuclear policies that threaten the entire global population every day? By the time FEMA managed to retract the incorrect warning message, it was too late to pretend that normality would resume. Their collective experience had laid bare the growing threat that nuclear weapons pose to the world. In the words of Kauai resident Cynthia Lazaroff, ‘Nothing happened, but everything changed’.