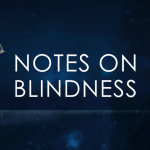 Experience what it is like to be blind with this immersive VR experience.

Notes on Blindness blends splendid visuals with the audio recordings of John Hull, which serve as a journal of his experiences as he came to terms with becoming blind.

It is a short experience, lasting around half an hour and split into six episodes, each of which covers a particular topic. There is an overall narrative whereby John gradually comes to terms with his condition. Some of the episodes have gentle interactive elements to them.

I must admit, I was fully expecting to get bored of this experience quite quickly but I have to say that I really enjoyed it. The visuals and audio were well designed and felt therapeutic, as did the tone of John’s voice as he described what it is like not being able to see. I was particularly captivated by his monologue about how the weather made a big difference to his sensory input – rain and wind allowed him to experience the things that he couldn’t see.

I felt that the art direction and 3D sound really brought John’s words to life and made the whole experience very poignant and enjoyable – I was actually a little sad when it ended.

The only downside for me was that there were certain interactive elements that were not accessible whilst I was seated on my sofa. Some objects were slightly behind me and I couldn’t move the controller to access them. There was also one point where I had to do a 180-degree turn and was unable to do so whilst seated, so I had to stand up for this (which took me momentarily out of my stationary boundary, disrupting the experience).

But this is just a minor gripe.

I can wholeheartedly recommend Notes on Blindness to anyone that wants to try out a gentle experience in the world of VR and has an hour or so to spare – it’s not too long but I do wish that it had been longer. It is very interesting to see inside the mind of a person that has experienced the world in a completely different way to yourself and I found it to be very emotive and thought-provoking.