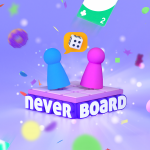 Play virtual reality card and board games with your friends whilst being bombarded with ways to spend your in-game currency.

Neverboard is essentially a platform for playing a selection of different games with up to four friends.

After launching the game, you are taken to a VR lounge area with four seats around a table. The space is pretty neat and a gander out of the window shows that it is pouring down with rain outside – the perfect weather for cracking open a board game.

Whilst the platform itself is free to download, the only game you get for free is Crazy 8s with other games being available to buy separately with in-game currency. So it isn’t as great value as it initially appears but one of the positives is that only the host has to own a copy of the game. So, for example, if I buy a new game, I can play it with my friends without them all having to pay for it separately – all they have to do is download the free app.

Other games available include 4-letter Word, Odd One Out, Treasure and Risky Quizness, which cost 4 quid each, or there is a bundle of three games for 8 quid at the time of writing.

The mechanics for the gameplay is pretty decent. You hold your cards or tiles in your hand and the table spins round to each player in turn. This can be a little confusing in Treasure (a bespoke board game) because the spinning of the board disorientates you when you are looking at the board to plan your next move.

The in-game currency can also be used to purchase items such as pizza, popcorn and a beach ball (which can be passed amongst friends as you play). It’s a nice touch but it does cost you money.

If you wish to play single player against AI players (which are comedically represented by houseplants), you have to pay for the privilege, again with the in-game currency. This is a bit annoying because if you’ve already shelled out for a game DLC, it is cheeky to be charged to actually play it!

Having said that, this is a game that is to be enjoyed with friends as more of a social experience than a gameplaying experience, so single-player is very boring.

I should add that it is possible to earn in-game currency within the game (for example, you can earn 100 coins per day simply by launching the game).

The graphics are not particularly good or bad. The environment looks alright, but in comparison to the Oculus Quest home screen environments, you may find it to be a bit disappointing.

You can customize your avatar to make a visual representation of yourself (or even somebody else), which is a nice touch. The games themselves look alright but have no real WOW! factor – and, to be fair, that is all that is needed for this type of game, which I feel is focused on the social aspects of hanging out with friends.

Similarly, the music and sounds are very basic. Background noise changes based on the game you’re playing – for example, Odd One Out has a farmyard theme and the animal sounds to match – which I think is a nice touch.

A nice feature would be to have a music player so that you and your friends can listen to your favourite songs whilst playing. Hopefully, they will add this in a future update.

I think people that enjoy just chilling out with friends in VR and playing board games could get a lot of mileage from this title, however, it would mean paying out for the DLCs so that you have a decent variety of games to play.

For those that are looking for a free game, Crazy 8s will get boring quite quickly.

First of all, I have to say that Neverboard is a great concept that has a lot of potential, but in my opinion, it still requires a lot more work.

The free download is basically just a VR chatroom with the option of playing Crazy 8s. Everything else is an upsell from additional games to items to play with and you are even charged if you want to play against the AI. The in-game currency obfuscates how much you are paying out and I could imagine some people easily paying a small fortune on what are essentially worthless digital assets.

To me, this just feels like a money-grab and although I respect and understand that the developers need to make money, I don’t think they have implemented it in a good way.

The sound and visuals could be better. The game is limited to four players and, with no random match-ups possible, you can only play with friends.

The games are also limited to those with very simple gameplay but I think there is potential for other big-brand games to be licenced in future – if the developers make the right choices, just one amazing partnership could propel Neverboard in popularity.

Overall, a great concept that I think has been implemented poorly, but it is early days and, with the right investment, it will hopefully get better over time.