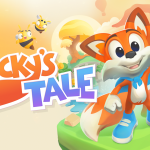 A delightfully nostalgic 3D platformer, which is sadly over too soon.

Lucky’s Tale hit the Oculus Store on 19 November by surprise with no build-up or fanfare. I never played the original release for the Oculus Rift back in 2017 but it seems to have a lot of admirers and so I decided to check it out.

3D platformers for the Oculus Quest are few and far between, which has had some critics expressing that this genre just doesn’t work on this medium. Let’s take a closer look at the game to see if they’re right.

The game begins with foxy mascot, Lucky Swiftail and his best friend, Piggy (a real-life piggy bank) asleep in bed when a one-eyed, purple tentacle monster reaches in through the window and kidnaps Piggy.

Lucky sets off to rescue his friend by following the convenient trail of coins that Piggy has left behind.

The game plays like a conventional 3D platformer on a flat screen. It is reminiscent of Super Mario 64, Donkey Kong County, Conker’s Bad Fur Day and other platformers of the 64-bit generation. For those that lived through this era, it can be very nostalgic to be back playing a game of this ilk.

Controls are simple, with the Oculus Touch controllers acting as a gamepad as you navigate through the crazy and colourful world. As well as 360-degree movement, Lucky can also climb, jump, double-jump and ground pound as he wanders around collecting coins and dispersing enemies.

Similar to its predecessors, collecting 100 coins results in an extra life being awarded. There are also diamonds to collect but these are of little importance, simply adding some points onto your score at the end of the level. However, as your scores cannot be shared, put on a leaderboard or otherwise bragged about, I didn’t feel that there was much point to the diamonds at all.

The game does have some VR-specific elements to the gameplay. Your head-tracking acts as the third-person camera, so you are able to move your head to get a better view of the game. However, the camera does sometimes move on its own, which can be a little frustrating when you are about to make an important jump! In addition, I often found that the camera’s viewport was a little too close to Lucky and I would have appreciated an option to zoom out a little.

There was also a nice element to the gameplay and visuals on the cavern level where it feels like you are wearing a headtorch as the darkness is only penetrated with light in the direction that you are looking.

There are plenty of secret areas and mini-games to discover and the coloured coin hunt following completion of the game adds an extra dimension of gameplay.

The graphics are decent for this type of game – it’s a 3D platformer with a cartoony style and so is never going to need top-draw visuals. The artwork is colourful and the enemies are fairly varied and each has its own unique features and animations. Everything ran smoothly and the graphics were fit for purpose.

The music and sound effects were alright but there was nothing memorable here. The jingles aren’t going to get stuck in your head and are easily forgettable, which I feel is a missed opportunity for the developer as catchy tunes can help to make a brand recognisable.

One of the most disappointing things about Lucky’s Tale is the short length of time it takes to finish it. Only a few hours are needed to get to the end. There is some replayability, by going back and collecting hidden coloured coins and perhaps the diamonds but this will probably only be of interest to the 100% perfectionist.

Lucky’s Tale is one of those games that has real charm and is a joy to play. For people that were born in the 70s and 80s, there is also an element of nostalgia that reminds you of the early days of gaming and titles such as Spyro and Banjo-Kazooie.

That said, the game was a bit too short for my liking and it is the sort of game that you will complete in a day and never go back to.

I think this game will appeal most to older gamers, younger gamers and players that are new to VR gaming. Players that have a fondness for 3D platformers will also like this game. Hardened gamers, especially those that grew up playing first-person shooters and are all about the graphics will probably not enjoy this title and it will feel a bit childish to them.