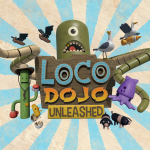 Multiplayer Mini-game Mayhem with this Mario Party-Esque title for the Oculus Quest!

Back in the day, I would spend countless enjoyable hours with the kids playing Mario Party on the Nintendo Gamecube and then the Wii. It would be a right laugh and, although competitive, nobody cared who won or lost – it really was the taking part that counted. We would all look forward to ‘Family Game Night’ (as we called in) and I got many treasured memories from these experiences. Other titles such as Carnival Games, Rayman Rabid Rabbids and Wii Party added to the variety this format has now evolved to the Oculus Quest with Make Real Ltd’s Loco Dojo Unleashed.

The wacky storyline has you competing for the fabled black belt/headband as you undertake a series of crazy minigames to prove your martial arts superiority.

Gameplay is based around a series of 16 wild mini-games in which you compete against other players (either friends or random match-ups) and the player with the most points wins. In between the mini-games you move around the board but nobody really pays much attention to that – you just want to crack on with the next game.

There is also a single-player mode but, like Mario Party, it’s not much fun playing on your own and so this feature has limited appeal. I think its only real use is to gain some practice at the mini-games, particularly if your friends keep whooping your ass.

The controls are so intuitive that instructions are not really needed. See the handle of the wheel of fortune glowing – grab it and give it a spin. See a bucket of arrows, grab one and knock it into your bow before letting fire. Part of the fun of these games, I feel, is figuring out what you need to do and the first time you play, the person that figures it out first is most likely to win. And the other players will be begging for tips.

The mini-games themselves go from the whimsical to the downright ridiculous. Milking piglets, stacking moles and catapulting kittens are all part of the fun in Loco Dojo Unleased.

The graphics are okay for a game of this type and animations run smoothly. They are simple, cartoon visuals that the Quest can render easily nd I never experienced any glitches during gameplay.

Similarly, the sound effects and music are wacky and fun, which complements the gameplay experience.

For single-player mode, the game will become repetitive and boring quite quickly. But this is to be expected – games like this were designed to be enjoyed with friends and family so that you can spend time together and have a giggle together. Therefore the multiplayer game has quite a bit more mileage and the mini-games can be enjoyed over and over.

Loco Dojo Unleashed is a fantastic game to play with people that you know in real life and also has some merit when playing strangers across the Internet. But, I feel playing with friends and family is better because you know one another and will have shared experiences and in-jokes that will make playing the game have an extra social dimension that adds to the fun.

Despite its merits, of which there are many, I felt that a few of the mini-games were a bit boring and there would be audible groans from all players if these games were picked. I also feel that adapting this game format to VR loses some of the charms that its predecessors had. Having the family sit on the sofa together, having face-to-face conversations and making eye contact with one another made playing mini-games a social event that I don’t feel can yet be emulated in a virtual world. However, for families that are separated by distance, this game can help keep those relationships alive in a fun and enjoyable way.