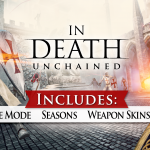 “The best archery game available for VR” – Forbes “One of the best looking Quest games” – The Verge We worked hard to make the best VR archery game on Oculus Quest even better with New Game Modes, Seasons, Tournaments, weapon skins, and graphics upgrades that defy the limits of the Oculus Quest 2. As you battle through the floating castles of medieval fantasy to restore Harmony in Heaven, Purgatory & Hell. Rain down arrows against forsaken souls and angelic creatures that have taken over the afterlife. A great Roguelite on Quest with excellent replay value that adapts to the player’s skill level and progresses as they play. Three beautiful, mysterious, and procedurally generated worlds with infinite replayability. Three epic boss fights. Explore multiple secret areas to unlock extra loot. The gate-defense game mode “Siege of Heaven” is perfect for new players, casual VR enthusiasts, and advanced players alike. Enjoy VR’s highest-rated bow & arrow mechanics. “