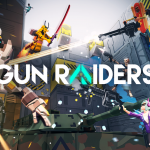 A fast-paced multiplayer first-person shooter that is 100% free to play.

Gun Raiders is a first-person shooter (FPS) where players congregate in an arena to shoot the crap out of each other with a multitude of different weapons.

NOTE: I played this game again during the Xmas 2021 break and became a little bit addicted to it – I, therefore, increased my rating.

The gameplay is much like any FPS. You start off in the lobby where you can go through the tutorial, practice with your weapons and customize your avatar.

Then, you join an arena with a selection of other players and start fighting either as a team or a lone wolf. Arena modes include:

The controls are very intuitive and will be picked up quickly by anyone that is familiar with this type of game.

It does have interesting dynamics such as being able to climb and use a jetpack to defy gravity. The jetpack can also be used to give you a burst of speed when you need it. Getting used to these features means that there are always new and interesting ways to take out your enemies.

Polygon-based graphics keep the game simple and prevent the lag that can be experienced in other shooters that place more demand on the Oculus’ processor. There are still occasional drops in frame rate but these are few and far between.

So, there’s nothing amazing about the visual effects but they are more than adequate for this genre, where gameplay and action rule.

Like the video, the music and sound effects are not great but sufficient for a multiplayer deathmatch type of game.

The mileage you get from Gun Raiders will depend on how much you like first-person shooters. If this is a genre you enjoy, you will find yourself playing it over and over.

The movement dynamics provide a lot of flexibility, so you will get a lot of satisfaction from trying out new fighting styles.

All players have the same weapons and skills so the game is very balanced. I thought this may be one of those free games where you have to make payments in the app to get the gear you need to compete but there is nothing close to that here. The developers monetize the game by offering paid-for avatar customizations that do not affect gameplay. There is also a season-long Battle Pass that can be purchased, which allows you to unlock skins and in-game currency as you rack up experience – these are just aesthetic and do not provide any gameplay advantages, which keeps the game balanced.

One thing I didn’t like about the game initially was all the bratty, rude, racist and homophobic kids spouting their mouths off during gameplay. There are options to mute and report other players but the toxicity of the community is a big put off and responsible parents will not want their kids exposed to this environment. A good way to overcome this is to join the Gun Raiders Discord group, where you can find more suitable people to play with.

Overall, Gun Raiders is great fun to play and the interesting movement dynamics helps to differentiate this game from the competition. The graphics and sound could be better but in this type of game, you’re not really there to admire the scenery. The most important thing is the multiplayer action and the developers have created something that works really well.