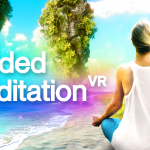 Relax in a variety of beautiful sceneries, with soothing sounds and guided meditations.

The first time I donned a virtual reality headset, I thought that this medium could be a great mediation aid. You could be transported away to a multitude of gorgeous locations to just sit and chill and practice mindfulness.

Guided Meditation VR does precisely this.

You can choose from a wide variety of scenery from bamboo forests to up in the clouds and whilst some of them are poorly defined and rendered, many look really quite stunning. Some of the poorer environments can actually be quite distracting and offputting to people that have strong attention to detail and so I think they should be removed altogether as they bring down the whole quality of the app.

Many of the environments are not static – small animations such as the movement of waves, add to the realism of the experience.

The soundtracks are soothing and the natural sound effects generally contribute to the overall ambience. But again, this is a bit hit-and-miss and some sounds can be distracting.

The guided meditations are okay – they are marketed as being written and performed by mediation experts but I always get the gut feeling that they are insincere in what they are saying, which actually stresses me rather than making me relaxed. However, this may just be a demonstration of the cynicism I have developed in my middle age.

On a personal level, I practice and enjoy meditation myself outside of VR and whilst Guided Meditation VR does offer something different, I feel it works better with the guided meditations turned off.

In fact, before this app came along, I had meditated whilst sitting on the Oculus home screen (the one looking down on the Earth from some sort of space station in orbit) – personally, I found this far more relaxing than the environments provided by Guided Meditation VR.

I feel that the content of Guided Meditation VR has just been slapped together without any real thought or discernment. Some locations are good and some are bad and it is the same with the sounds and guided meditations. It is as if the developers just tried to fit in as much content as they could, without any sort of curation. This means that the quality of your own experiences will have an element of pot-luck.

Even though it is not for me, I think this app does have a place and meets the needs of those that might be new meditation and wish to be guided in what they need to do.

More experienced mindfulness practitioners would probably prefer to just download a 360-degree environment to their own particular desires and sit silently within it. Or maybe travel somewhere in Wander to find their ideal meditation spot.