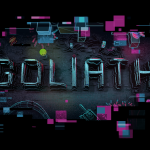 An interactive documentary about mental health.

To kick things off, I’d like to say that I found the story very interesting and poignant at times. I am very glad I experienced it and would recommend it to anyone that has an interest in mental health, particularly schizophrenia, or is affected by them directly.

However, after the experience had finished I wondered if the developers were making full use of the technology available to them. I feel this was an opportunity to bring the words of the narrator (Goliath) to life and help the viewer to experience and understand what it feels like to suffer from delusions and hallucinations. Instead, it just felt like a few fancy graphics and interactive elements to break up the story. In all honesty, I believe that I could have got the same experience from watching the documentary on a flat screen or even by simply listening to the audio.

There was also a bit at the start where I had to unmute my mic so that I could say my name out loud. I’m not sure if I missed it but there didn’t seem to be any point to this – my name was never used in the experience – so this seemed a bit pointless!

I think Notes on Blindness nailed the combination of visuals and interaction with storytelling and narration to create a truly great experience and so I would recommend this experience above Goliath.

Reading back over my review, I’ve realised that it sounds quite harsh, so I’d just like to reaffirm what I said at the start. Goliath is well-worth downloading and watching. The narration and overall story are fascinating – I just don’t think it needed to be a VR experience.

Through mind-bending animation, award-winning GOLIATH: PLAYING WITH REALITY explores the limits of reality and a true story of so-called ‘schizophrenia’ and the power of gaming communities.

Echo (narrated by Tilda Swinton) guides you through the many realities of Goliath, a man who spent years isolated in psychiatric institutions but finds connection in multiplayer games. Combining heartfelt dialogue, mesmerising visuals and symbolic interactions, weave through multiple worlds to uncover Goliath’s poignant story.

Created by the award-winning creative studio Anagram, the team that brought you The Collider and Door into the Dark.

*Please note, you will be required to use your microphone during this experience.

**For users who have trouble leaving the room in the sequences on the arcade machine, please use the thumb-stick to move out the door. The door is not visible when seated.”