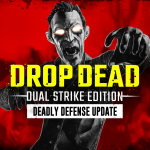 IMMERSIVE ADVENTURE Experience a thrilling FPS action adventure story told across three chapters. You’re the last agent alive able to stop Dr Monday and save the world! Slay the zombie hordes using a high-tech visor, insane gadgets & an arsenal of Z-shredding weapons. Team up with former CIA operative Billy-Bob and his daughter Celia-Jane as you delve deep into the true madness of Dr Monday’s nefarious schemes of world domination! HACK & SLASH Alongside impressive firepower, get up close and personal with the zombie horde with melee weapons! Hack off limbs & hurl axes at the shuffling undead. Deflect spitter slime with baseball bats & hit a zombie head for a home run! DUAL-WIELD WEAPONS Wield two weapons at once. Double the firepower, double the damage! EXCITING MULTIPLAYER Team up with a friend in horde mode & hold back the undead together! NOT BOOTING? Update your Oculus device firmware / ensure your device storage is not full JOIN THE COMMUNITY DISCORD: Pixeltoys.com/discord”