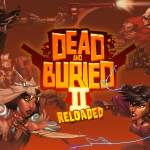 Dead and Buried II is a fast-paced multiplayer shooter set in a supernatural western world. Grab your six-shooters and choose from multiple gamemodes. Compete against real players online to see who the best gunslinger is or play cooperatively versus the undead horde! The game is a sequel to the popular Dead and Buried released on Rift and GO. Features: – Competitive Modes: battle online in free-roaming Deathmatch or cover-based Shootout. – Cooperative Modes: band together in free-roaming Survival or stationary Horde. – Duel it out: Go 1v1 in a last-man-standing Quickdraw match. – Multiplayer Bots: never wait for players again! Bots will fill the game. – Portable: with Quest, take the action on the go. – Social: make new friends in the Town and spin up matches together. – Weaponry: six-shooters, grenade launchers, and more!”