Skip to content
VR:RVW→Oculus Quest 2→After the Fall Review 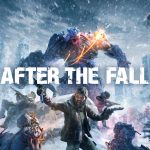 Includes cross-buy on the Meta store platform. The After the Fall® – Launch Edition includes cross buy and access to the first season of content, including: The “Hollywood Boulevard” Harvest Run, the “Warehouse” PvP Arena, new game modes, new weapons, and more. From the team that brought you Arizona Sunshine® comes an epic VR action FPS with intense 4-player co-op gameplay at its core. Team up with friends and take on a post-apocalyptic VR world filled with ferocious undead–mutated and twisted by the relentless cold. • Go solo or team up in intense 4-player co-op play • Conquer the ice-covered ruins of dystopian LA • Fight huge hordes, specials and bosses • Craft, upgrade and wield weapons with real-life movements • Go head to head in fast-paced 4v4 combat